We must agree that finding good gluten-free vegan pizza recipes is hard enough. Finding oil-free recipes is also another challenge all together.

So, we are here to help you. These 7 pizza crust and sauce recipes are a relief. 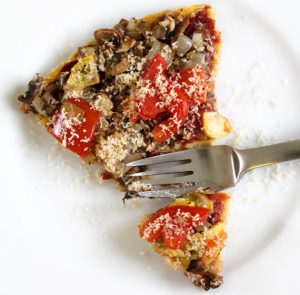 To start off is a cornmeal crust gluten-free vegan pizza from Straight Up Food. It should be noted that the rosemary in the crust adds a little something extra to this dish, and fresh is best! This recipe comes with a recipe for oil-free vegan pizza sauce and suggested vegetable toppings.

Another cornmeal crust is gluten-free vegan pizza from Beans, Rice and Everything Nice. It is made up from simple ingredients (just cornmeal and water), but the result is flavorful and filling. A cornmeal crust pizza isn’t as “crusty” as other pizzas, but if it’s cooked long enough it holds together quite nicely.

Vie De La Vegan creates quite the crust using lentils in a unique way for a sweet potato lentil flour pizza. The recipe is very simple and with only 3 ingredients it doesn’t take much to put this oil-free vegan pizza recipe together. In case you don’t have lentil flour, you can make your own with a high powered blender. 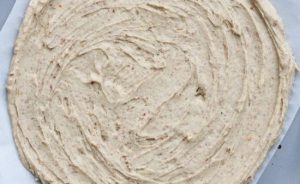 Cauliflower is a more versatile vegetable than it is often given credit for. With a satisfying texture and herb infused crust, this cauliflower pizza from Detoxinista works perfectly. The cauliflower, almond flour and flax seed, combination in the crust make for a great gluten-free and oil-free vegan pizza. So, load it up with your favorite toppings and it’ll be quite the veggie pizza!

An oil-free vegan pizza crust made with potato sure does sound perfect. Potatoes make up the majority of this pizza, and they really hold the crust together well. When combined with oat flour, potato starch, and almond butter, the result is a sturdy gluten-free crust with a great texture. For a nut-free version you can substitute in tahini to replace the almond butter. 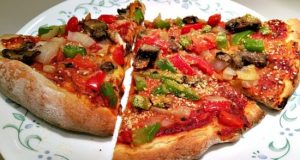 Who would have thought quinoa and potato could make such a great combo? The preparation method for this oil-free vegan pizza recipe come in video format from Cooking with Plants, so you can follow along through the cooking process. Made using non-stick baking paper keeps the pizza crust oil-free. Also, cooking the crust on both sides helps “crisp” it up. Finish it off with a sauce and your favorite toppings and dig in!

This fat free pizza sauce from Brand New Vegan, loaded with herbs is a garlicky, oil-free vegan pizza sauce that has all the essentials. A touch of sugar adds a hint of sweetness that completes the sauce. 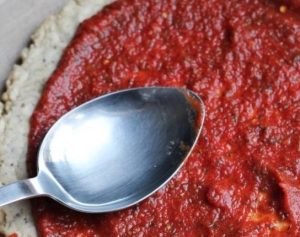 Katie from Plantz St. uses sun-dried tomatoes for an oil-free pizza sauce that’s full of flavor and easy to prepare. Use fresh or dried herbs and make a large batch so you can have plenty of sauce on hand throughout the week.

You can top your gluten-free vegan pizza off with an easy homemade pizza sauce recipe courtesy of The Vegan 8. The recipe uses tomato puree rather than paste along with a touch of maple syrup for a bit of sweetness. Spread it on a pizza crust or drizzle it over avocado, pizza-style toast as suggested. Either way it’ll taste great!

This vegan marinara sauce from Potato Strong can be used as a pizza sauce or poured over pasta. This oil-free vegan pizza sauce is chunkier and rich in vegetables (crushed tomatoes, bell peppers, and spinach). Add in tomato paste for an ever thicker sauce.

Contrary to popular belief, you don’t need oil to make a good basil pesto sauce. This oil-free vegan pesto by Plant Based Recipe has a nice, thick consistency and is full of flavor. No dairy or oil required. And yes, pizza sauce is just one of the many ways to enjoy pesto!

This Oh She Glows high protein, oil-free basil pesto recipe is made up from white beans. Leave out the oil and you’ll have a low fat pesto sauce that will go well with tomatoes, artichoke hearts, spinach, or any other topping you like.

Made from cashews this garlic Alfredo is an oil-free vegan pizza sauce from The Vegan 8. They create a thick, creamy texture that allows the vegan Alfredo sauce to stand on it’s own. It works well as a single topping if you would prefer a simple pizza, or you can add on a bunch of veggies!

So, what do you waiting for? Prepare your favorite combination! Mix and match the oil-free vegan pizza crust and sauce recipes to make different combinations for even more variety!